Consumer credit is undergoing a transformation

Over the course of recent years, the consumer credit market has been radically transformed. The new limiting effect of the interest rate ceiling applied in 2016 is behind this change. Under this law, the upper limit to interest rates has decreased from 15% to 10%. This aims to prevent debt burdens. Since then, banks are all seeking to reduce credit further and further. Find out more about how the market has changed since 2015 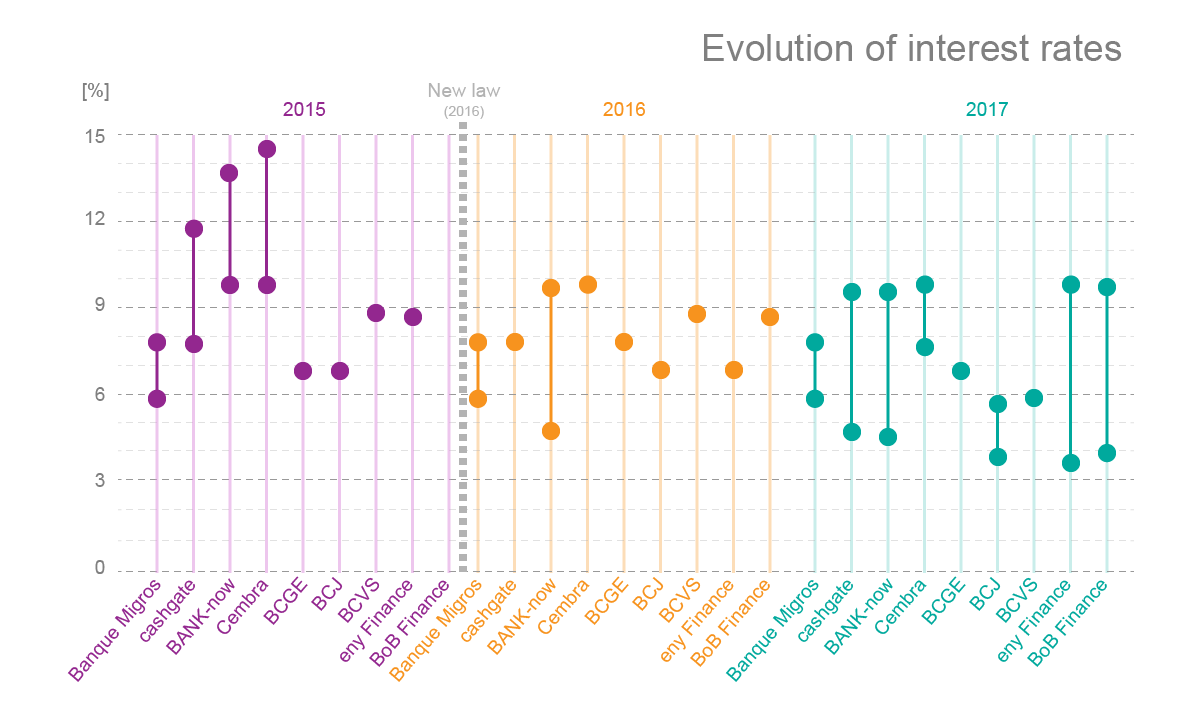 Whereas only three banks have had to reduce their interest rate ceiling, all have opted for the strategy of the lowest possible rates. Prior to application of the limit, the minimum rates did not dip below 5.9%. Today, we are observing a marked downwards trend. In 2017, most banks that offer consumer credit proposed minimum rates of around 4.5%. The record minimum rate was 3.9%. However, whilst the minimum rates are lower, the average rate sold is higher. Only 15% of those requesting a loan obtain rates between 4.5% and 6.9%. And more than half of consumers obtained a rate between 9% and 9.95% from July 2016 to the end of 2017, thus a reduction of 3 points compared to the average rate before the new restriction, but remaining very close to the obligatory ceiling. Today, we observe a new decrease. The average is currently between 6.9% and 8.9%. 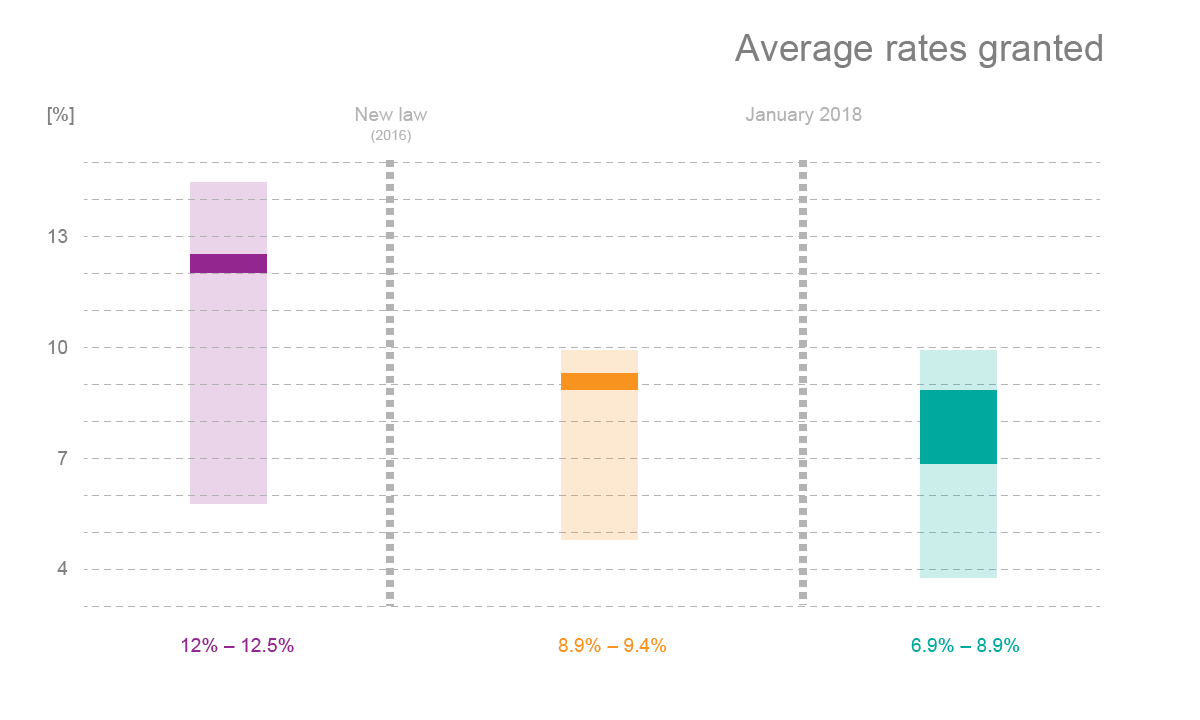 How is this offset?

The significant decrease in rates implies counterbalancing this in other areas. The term in number of months has increased in recent years. Previously, it had been difficult to obtain a loan lasting for more than 120 months, for example. Today, a duration of this order is more and more frequently accepted in practice, generating more interest. Cashgate, Banque Migros and BANK-now have thus extended the repayment term to 84 months, compared to 60 and 72 in 2015. In the same way as Eny Finance and BoB Finance, they offer loan terms of up to 120 months. 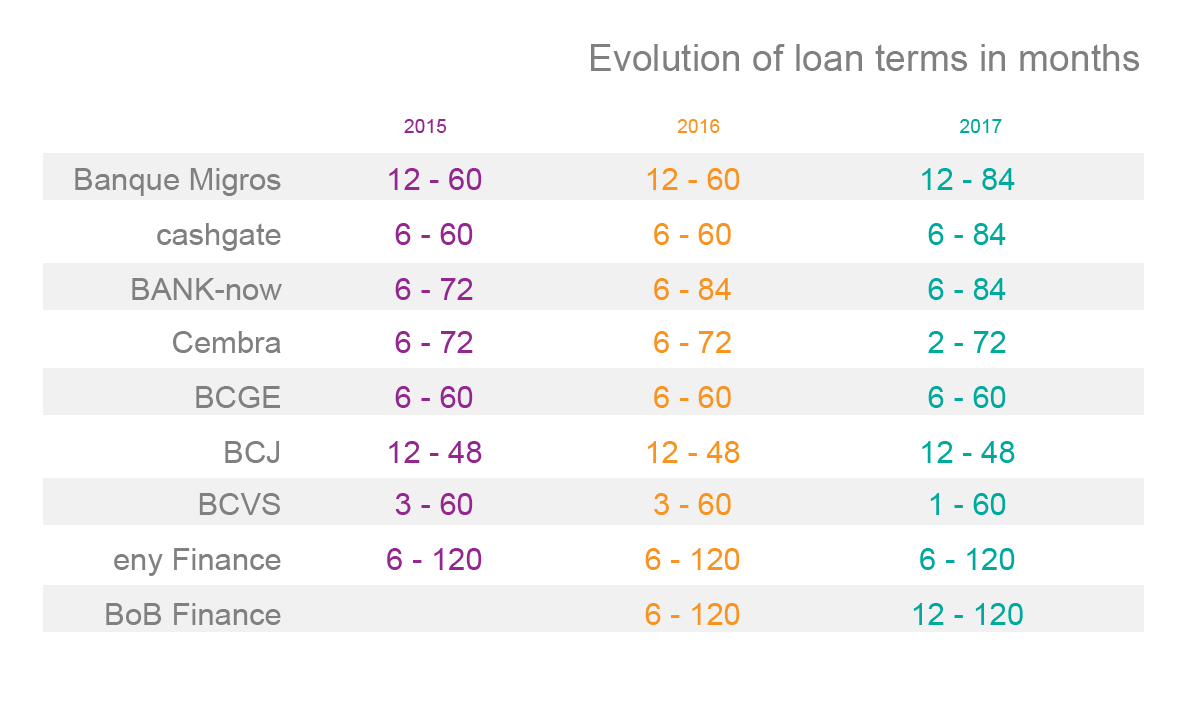 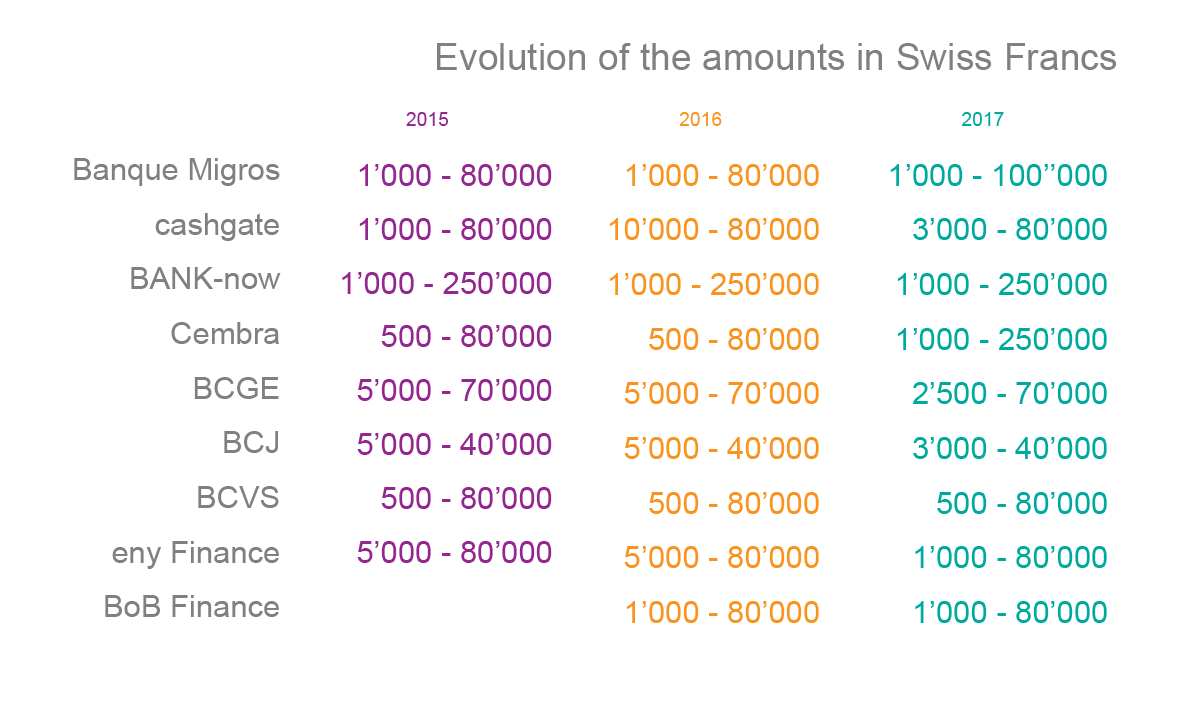 For the consumer, these market transformations do not mean reduced costs, but instead reduced risks. This is because if these rates are lower, the repayment term will tend to be longer, which implies a greater number of monthly payments. However, the risk of getting into problem debt is lower with lower monthly payments. Profiling of client risks and earnings is also made easier by the wider range of loan amounts. Other laws passed in 2016 contribute to preventing debt burdens. Aggressive advertising is no longer permitted and the time period allocated for the right to revocation has doubled, increasing from 7 to 14 days. Thanks to responsible credit, brokers and banks are also now obliged to take into account risks posed by unforeseen financial circumstances.